I  return to Kane Cemetery often to draw the Vickers memorial. A stone figure stands on a high pedestal with a great stone fisherman’s anchor steadied in her left hand, under the patchwork of golden light at the tree-lined harbor entrance. It’s a monument the citizens of Port Madison raised to honor a poor engineer on the Russian built, steam side paddle-wheeler tug, the Politkofsky.

I like to think Vicker’s went easily. That he never felt the shaft handle that fell on his head, delivering the humble British immigrant into the hallowed halls of Puget Sound maritime history. The good citizens raised a charitable fund to have this sculpture shipped from Italy.   Here it stands, a century later,  a moving gesture of honor for the bygone age of steam paddle wheel tugs and the men in them.   I am heartened by knowing how loggers and mill hands paused from clear-cutting Bainbridge Island’s forests to pool their hard-won dollars to honor a humble seaman with a fond tribute.

It is such monuments that mark high civilizations. I hope that we are still capable of such moving, selfless gestures of magnanimity. For, often, it seems our culture has nothing to leave posterity but endless strip malls, business and theme parks and miles of consumer-friendly, soul-denying landscapes. 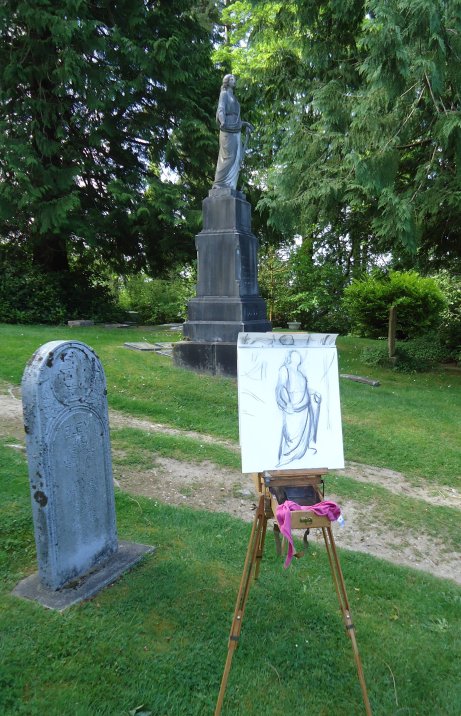 I’ve tried many times to capture the essence of this angelic figure in paint or charcoal, and her spirit has ever eluded me. She seems to rise by the power of her fisherman’s anchor, as if that very symbol of hope and faith had lifted her into the empyrean vaults by its dumb weight; and the toil of a Liverpool engineer is rewarded, finally,with the grace of an angel’s smile.

2 thoughts on “Monument for a Liverpool engineer”