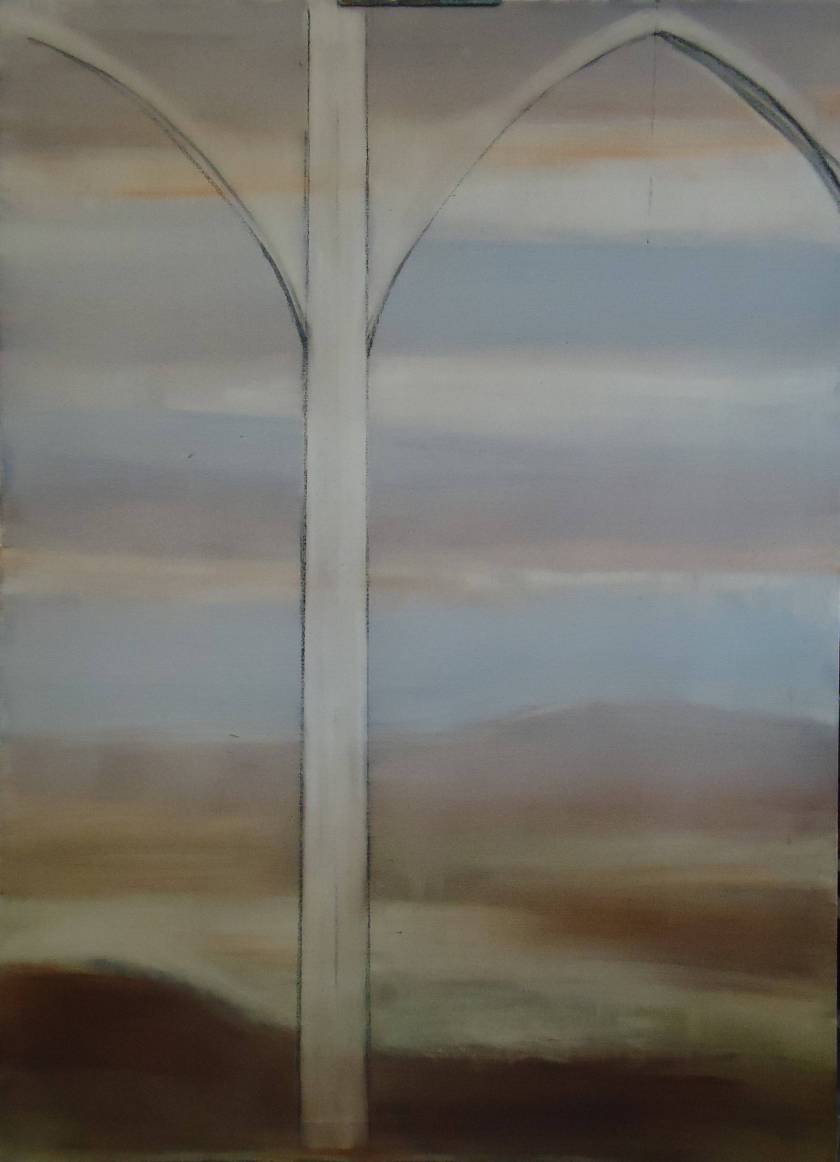 Sometimes painting is a real struggle.  But I press on, slap the obdurate material into shape, as if my worn brush might push the paint into actual space–into the 3rd dimension.

Art often requires tactics that subvert one’s own assumptions in order to create the one image that is to the point, heartfelt, and true.

This one is a mess.  The possibility of failure is always present.  It is a perpetual letting go– of  tricks, habits and even those pretty passages that no longer serve the whole.

This exhibit started with an idea about altars or memory stations.  It is an attempt to combine my art with an interest in Blake in a way that helps me understand this eccentric genius and gives my own work greater depth.

The painting shows a stone wall with a niche in which is placed an image inspired by one of Blake’s Persian looking Angels.   Carved into the stone wall is a willow tree that arches over the niche and breaks into space.  The sun, etched into the wall, spreads beams of light over the canvas.

The next painting is of Vala,   Jerusalem’s shadow, whose veil obscures the celestial light, and seduces Albion  away from Jerusalem’s pure spiritual beauty.

She is a complex figure.  Kathleen Raine has likened her to Psyche.

Know me now, Albion:  Look upon me. I alone am beauty.  The imaginative human form is but the breathing of Vala.  I breathe him forth into the Heaven from my secret Cave, born of the Woman to obey the Woman, O Albion the mighty.  For the Divine appearance is Brotherhood, but I am love.

The best way to approach an art exhibit is to work on all the pieces at once.  I’m prepping 7 canvases, working on the memory stations and doing the memory practice.  Here is a video to give an idea of how it works.

Here is a small study for a larger piece.  I’m wanting to keep it lean, avoid accumulation of extraneous detail and focus on atmosphere, light and a general feeling of spaciousness.  This one seems to suggest loss.

Shadowy forms step forward from the mists with a single swipe of the paint rag.  They appear in my dreams silhouetted against ancient fires, as if to demand I attend to their their melancholy plight wandering the in-between.

The memory practice is working.  I went from recalling no dreams at all, to writing 5 pages this morning. These seem to have associations with the art project, “real” life, and offer encounters with Asiatic shamans in crazy hats who get on my case for some vague act of forgetfulness.

The intent to work with the spontaneous flow of dream imagery-the attempt to bring unconscious content into the light of day-involves a confrontation with subject/object paradox.    Who is doing the observing?  Who is observed?  Looking inward brings up thorny issues about perception and reality that artists have been struggling with since Cezanne, and which mystics have explored for centuries. 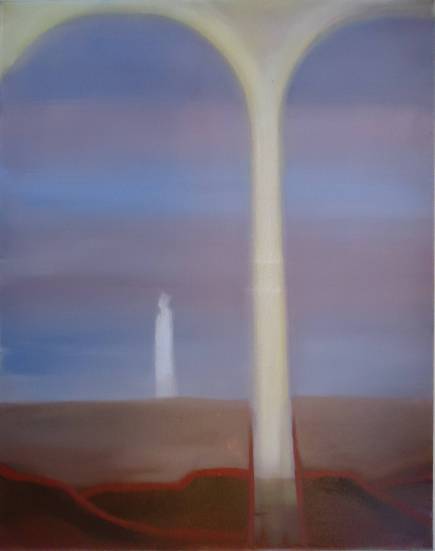 How needing of compassion are the ignorant and the deluded, bound in this confining dungeon of egotistical attachment and the subject-object dichotomy…

The Tibetan Book of the Dead

Blake saw his brethren bound in this dungeon, and sang of fallen Albion held in thrall to the satanic, scientific-materialism that set man apart from nature, charity and the Heaven within himself. 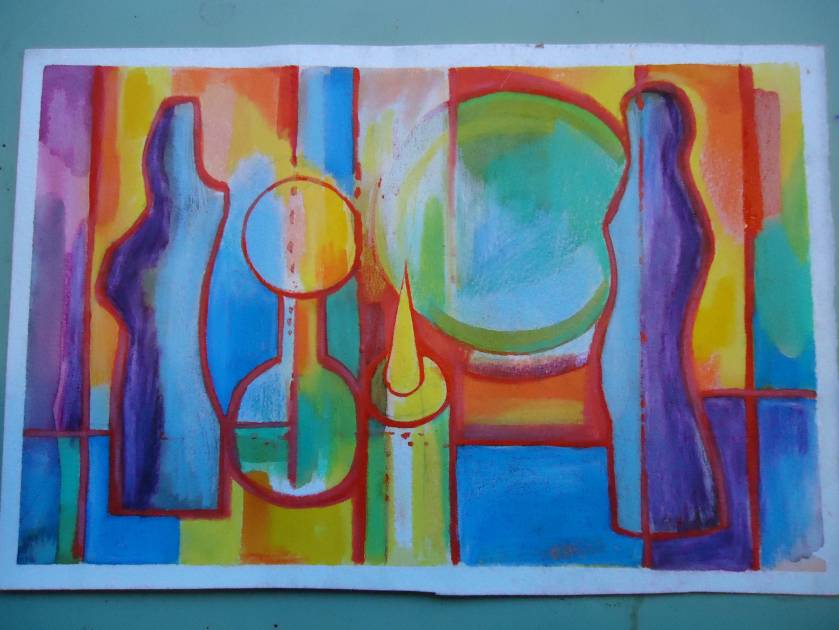 A dream:  I am building a stretcher (wood frame to stretch canvas over for painting) for my February art show.  After I nail it together, I see that I’ve used 2×4’s which are too heavy and ungainly for the size of the painting.  The center brace is too short and part of it is made of ground contact, pressure treated wood, a toxic and inappropriate material for a stretcher.

Now this is where it gets interesting.  A dream about my upcoming art show.  This project is continuous  with the practice I undertook to memorize dreams in order to gain a broader perspective on the work.  This is a view informed by the heart as well as mind.  A kind of feedback loop is created:  The intention to bring the dream to the waking world coincides with an awareness of waking life (art show) within the dream state.  This opens a dialogue between the flow of unconscious imagery and conscious intent.  It gives valuable clues on how to proceed.

I’m not sure what the symbols of treated 2×4’s and toxic ground contact, pressure treated wood tells me.  But I have an intuition that it relates to right proportion, appropriate measure-ways and means.

I’ve long intuited that lucid dreaming abides by the golden mean proportion.  It is not just control of dreams, but a way to avoid getting lost in allurements, terrors and distractions; mesmerized by the phantasms that present themselves as real.  It depends on the right proportion between waking and dream.  These contraries are held in a dynamic tension and generate a third element-a state which transcends contradiction. The point of all this is to gain clear awareness of profound emptiness.  This is the truth of the most fundamental Buddhist koan:

I began sculpting memory stations with plaster to use as a basis for drawings- studies for a series of large paintings.

This one has taken a vaguely angelic form.

The challenge is to paint these ethereal beings without sappy cliché.

Without contraries there is no Progression.       -William Blake

My next art show is coming up soon.  My idea is inspired by the Memory Theatre. This is an ancient mnemonic device used by actors and rhetoricians to commit long speeches to memory. The memory places are niches, or altars that contain imagery (the more outlandish the better) that facilitate recollection of the text. In ancient times, these features were incorporated into the design of theatres.

My idea is to make this part of the process of creating the work for my show. I’ll start with the basics: clean up my studio and create a series of 10 altars which I will decorate with whatever imagery will facilitate recollection of a long poem. At the same time I’ll prepare 10 canvases which will correspond with each of the memory stations. These paintings will comprise the exhibit.

I haven’t decided on a poem yet but maybe one of William Blake’s medium-length works will serve. This memory process will be concurrent with the creation of 10 paintings inspired by each of the memory stations.  The art show’s theme will be continuous with the theme of the poem.

The whole process from straightening out the studio to “completion” of the paintings will be documented in this blog with photos, text, video and recordings. Stay tuned.

This is my post in some time.  I’ve been busy preparing for our trip north to the San Juans.

Again, our crossing of the infamous Straits was placidly uneventful.  This is fine by me as I’d rather get my adventure in other ways than getting slammed by the huge waves that can travel all the way into the eastern Strait of Juan de Fuca.  The pictures have struck my heart with a cold dread.  Then there’s the fog which can veil the looming menace of beasts like this bearing down on Old Hand at 18 knots. 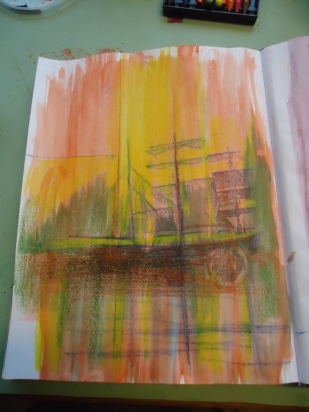 Cats paws darkened the blue reach of Puget Sound beyond Skiff Point to the north. I went below to shut down Phyllis, my Norwegian diesel engine (named after my mother,) trusting the breeze would hold and keep us off the shallow bank south of Fay Bainbridge park. There’s nothing so peaceful as that moment when the wind lifts and the engine is shut off. Old Hand sails better without human interference close-hauled, so I sit back and listen to the sound of water moving along her hull as she gathers speed along Bainbridge Island’s east shore.

It was lovely. We had attained a state of harmonious accord between man and boat in the mandala of winds, and that single point we occupied at that particular moment in time and space was golden perfection. I try to seize such moments on the fly and, by retelling them, prolong existence itself and sail with the generous breeze into eternity.

The resonant voice was hoarse, as if graveled by long watches in the north Atlantic-as if it emerged from the very depths of the bilges.

I let go the jib sheet as the bow came across the wind and hauled in for a port tack toward deeper water northeast.

“Nicely done, lad. Ye’ll be a sailor before long.”

McWhirr is a pain in the neck sometimes. He’s a relic of working sail and can be as dark as Ahab in rehab on a bad hair day.

But such a breeze can soften a heart encrusted by long watches over icy seas. McWhirr stood stark against the red sky like a weathered piling on a  rocky cape.  Light flickered through the dark shrouds  behind him as if projected on a movie screen.

“What do you make of the Ancient Mariner’s yarn, lad?”

– through soul’s stations he sails…sweetly, sweetly blew the breeze…sigh of compassion that pervades all creation… repents his cruel slaughter of the innocent bird and sees divinity in all beings… it raised my hair, it fanned my cheek…essential reality…wisdom and compassion combined…

McWhirr brooded as if some heavy recollection had made him grow, if it were possible, even more saturnine.

“Aye, we all carry the albatross’ weight around our necks.”

-tangled lines lost in fouled line-lockers…it mingled strangely with my fears…endless dream pilgrimages through foreign city streets looking for misplaced baggage… He loved the bird who loved the man… all those times too slow on the uptake, clueless or proud... who shot him with his bow..neglect of kin…Mom’s eyes…executors of karmic law…archons of the muddy sphere in which my life is, more or less, firmly moored …Oh, my neck.

“What about that part where he must repeat his tale endlessly to strangers?”

“I don’t know.   It sounds like a writer I know. But I won’t mention any names.”

I shot this video yesterday while cruising slowly down Bainbridge Island’s east shore toward Point Monroe and Port Madison beyond.  Although my speed was a mere 2 knots, it was one of those days where all came together in a perfect moment.  The only sign of wind I saw wind was along my course-