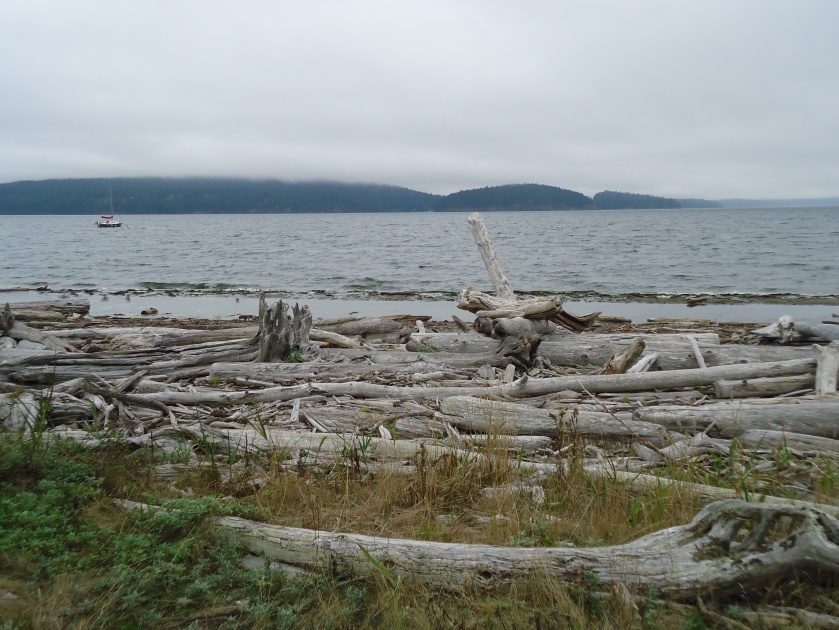 In the mid 70’s I had a studio in Eugene. Nearby was a pioneer cemetery where stood a tall, gray weathered tomb which housed an early patriarch of the Oregon Territory named Septembus Spencer.   While I won’t deny my memory may embellish the facts, this outlandish moniker has stayed with me all these years. Now I find that one of Willamette valley venerable line of Spencers had made his way further north to this stormy spit on Lopez Island’s east shore.

As though by a master sculptor’s hand, Equinoctial storms have carved cyphers into the rough stonework of the storehouse.  Apples still fall from the trees he planted on the grassy knoll.

Septembus comes from Septentrio, which is Latin for North.

On this gravel spit formed with perfect symmetry by alternating currents are seen middens of a tribal fish camp that had been used for over 3,000 years.

Though I bear no relation to the Eugene and Lopez Spencers, I find it strange to arrive at the most northern outpost of those Northwest settlers-that venerable line whose family tomb I saw in my earlier days. It is their most, so to speak, Septentrionic point.

I take heart in knowing that the same northern, wayfaring spirit calling us toward these enchanted Isles inspired the peregrinations of T. W. Spencer-that the same pole star he set his course by is the way point toward which Old Hand shapes her course.

I was taught by a Cowlitz elder that the cardinal directions are more than physical points on the compass, but spiritual states which must be embarked upon with full awareness of all their various qualities.

Black Elk once said the center of the world was Harney  (was this the same hawkish general who tried to incite war with England over a dead pig?) Peak in South Dakota.  Black Elk went on to add that the center is everywhere. It’s the same awareness that lead Jesus to sing to his round-dance on his crucifixion eve:

“The universe is inside the dancer.”

The tide flows into the lagoon at full flood like the rushing green flow of the Willamette River by which I sat staring so long that, when I rose, the solid banks seemed to move with the same fluid motion as the water.

The sacred land is everywhere-is already won. It is somewhere in Harney Channel (Harney again!) The Center is in the old Odd fellows Hall on Orcas Island where we hold our Dance of Universal Peace on this Sunday. The universe revolves around Old Hand’s keel as we voyage to the spiritual state of North; to honor the wisdom teachings of all faiths that ever points us toward the true polestar.

Lily and I have been making flyers and organizing our September 22nd Dance of Universal Peace in East Sound, Orcas Island.  Our voyage has a direction beside that which the winds take us.

From the vantage point of the Doctor’s Office coffee shop (it was an actual doctor’s office), I watch all manner of craft and float planes enter and depart Friday Harbor.  Old Hand lies anchored in 9 fathoms off the Oceanographic laboratories on the north east shore.

We are leaving later today for either Spencer Spit or Fisherman’s Bay on the north end of Lopez Island before our event.  it’s not really our event, but  part of a tradition-a spiritual community that exists all over the world.

Here’s Lily leading a song/dance she wrote based on the Amitabha meditation.  I may have gotten a little to free with the effects, but you can maybe get the jist of it.