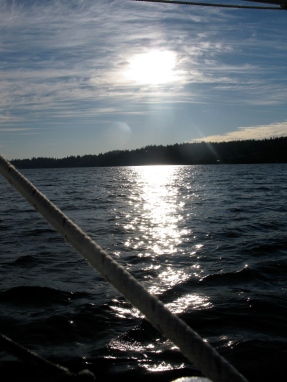 The weazy drawl came from a wall-eyed galloot who followed me. The starboard list in his walk, the hollow stare and grog-blossoms that festooned his weathered mug showed him to be a waister on a leaky bum-boat.

“He has a scowl like a North Sea line squall that would strike fear into the black heart of Beelzebub himself.”

He sent a brown spew of tobacco juice onto the dock as if he spat out the last vestige of the accursed name.

“They say, long ago, the  crew of the old Uranus found him off Cape Horn-a mere babe afloat in a Quaker cradle.”

This was laying it on a bit thick.

I’d signed articles the day before-and, here I am, traipsing innocently down the wharf toward my next berth and this guy starts yammerin’ like some hop-head bit-player in a mid-20th Century movie.

He pointed a boney finger at the dismal sky as his voice rose.

“They say he’s Zoroastrian ‘er some such heretical blasphemy that, as sure as I’m standin’ here, will lead the impious reprobates into eternal hellfire!”

This was prelude to my first encounter with Saturnius McWhirr…

Point no Point lies off the port beam at sundown. By the time we make Foulweather Bluff darkness has fallen, and the Kinney Point light is veiled behind a scrim of fog.

His gaunt profile lit green by the radar, McWhirr says:

“What’s all this about Aeneas? The Roman?”

“And what has he to do with this voyage?”

“Then I suggest you focus on navigating the here and now, son.”

It’s McWhirr’s watch. Sometimes he gets on my nerves. Zero imagination. Mention free association to him and he grabs a cutlass. He thinks it’s a Commie group…

Here’s an installation photo from my show.  It’s good to get it done.  Now I can move on to other things.  Like gardening, chopping wood, and writing blog posts again.

Putting up a show is always a double-edged thing.  There’s the excitement and sense of accomplishment, but it’s also something of a let down in the end.  It’s a summation, of sorts, a statement of where I’ve arrived at this point in time, life and career.  It’s strange to think I did my first oil painting 50 years ago.  I thought of showing this painting too, but couldn’t hang it without a little more work on it.  Would this be cheating?

Here is a painting of the Vickers memorial in Kane cemetery.

An angelic stone figure holding an anchor stands on a pedestal gazing up into the golden light that filters through the maple trees.

The anchor has long been a symbol variously interpreted as faith, hope and soul.  But I think there is another level of interpretation.  The anchor and movement of chain as the tide rises and falls is  a cosmological image.  As the tides rises, the circle occupied by the vessel in its revolutions gets smaller until the chain is vertical, and remains, theoretically, in the center.  This movement describes a cone shape.

The geocentric, medieval image of the universe, though out-dated by Copernican discoveries, has its origin in human experience and is set to the measure of man’s ratio. It is a true cosmology because it defines spiritual co-ordinates  and gives meaning to a world that, at certain points in history, tends toward a state of dissolution, of entropy. This image of the universe reflects a recurring pattern in civilization’s rise and fall,  yearly cycles, and, on the microscopic level, the alternation of breath.

In Dante’s Divine Comedy, the downward vortex where Satan resides at nethermost point of hell, cast down by gravity and the weight of sin, is mirrored  in the ascending spiral of Mount Purgatory.  In the medieval scheme of salvation, this point is the earthly paradise at the mountain’s summit.  Martha Heyneman in her fascinating book, The Breathing Cathedral, likens this spiral to the movement of thread on a spindle.  She sites Yeats’ vision of  gyres, where the  reciprocal upward and downward movement of these vortexes occur simultaneously.  This reciprocal movement is like the souls ascent through the heavenly spheres at death and the corresponding descent of Divine Intellect into the manifest world, of the timeless dimension into the field of time. 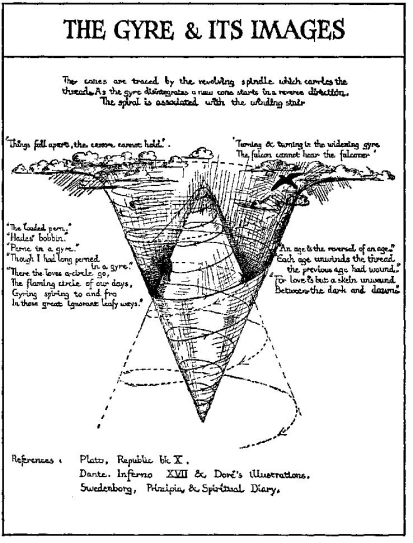 In traditional societies, the dead were honored for their humble service, and the relationship between the dead and living was one of mutual reciprocity. We are culturally enriched by such simple gestures of remembrance. The honor conferred upon the dead completes a pact with the living and the departed are helped in their ascent toward knowledge and liberation.

daily, fresh news from around the world