Friday Harbor is a busy port with boats, ferries and float planes coming and going at a frantic rate. I sit in the Bean Cafe with other hyper-connected wayfarer’s, tapping away at my quaint laptop, churning out this news dispatch from the Salish Sea. 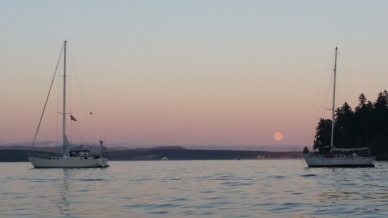 I’ve dialed back on the barrage of bad news endlessly reported by the media industry to make my own, to  shape these fragments– the discombobulated vessel of my prose– into some kind of order.

With the need for quick passages to make the San Juan’s before the full moon I’ve had little time to pause and reflect on the true reason for the voyage.

Scattered among a pile of cheap, tattered composition books are fragments of my attempt to evoke, in written words, the ineffable impulse that draws me ever further toward a north only dimly seen on the drive-in movie screen of my dreams.

Old Hand voyages into the Sea of imagination, over the vertiginous depths of the unconscious. Her course is shaped by a vision glimpsed when I first beheld the vast azure expanse from my dad’s early 50’s station wagon as the Spencer family loudly tooled down Highway 101, fleeing the smog and squalor of L.A.

With my Brother Slim, I would practice the fine art of “body whomping.” It was then I first felt the sea’s loving caress, as well as the thumping shore-pound that handled my young person with all the tender ministrations of Freddy Blassie.

Yay, even Byron penned florid poesy to the green muse of body surfers in his epic Child Harold which, to this very day, remains blissfully unread by yours truly. 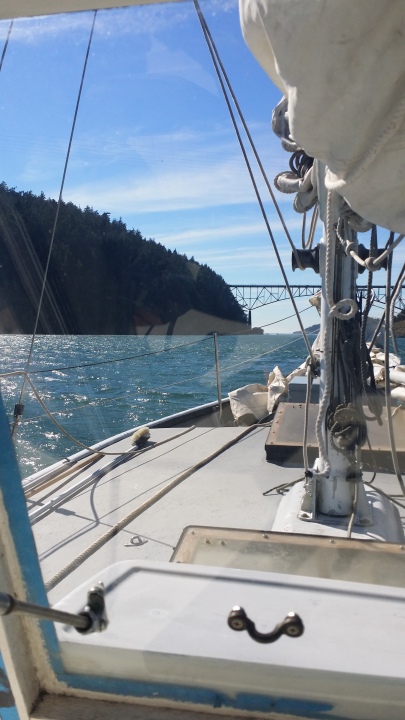 It is this same feeling of ecstatic immersion in the hylic element of Poisidon that pulls me toward a vaguely descried northern way-point. It is a lapis blue vision of eternity seen reflected on the whirling eddies of Deception Pass.  Here and now, at this particular waypoint in time,  I see the abysmal, turbid darkness overlaid by the counter-clockwise circulation of  the divine light.

5 thoughts on “The Circulation of the Light”