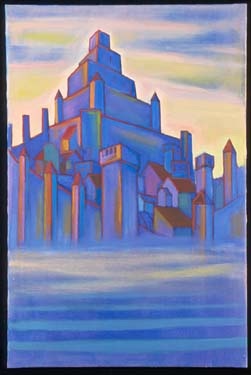 I begin this post with only the vaguest notion of what it’s about.  A feeling, a mood that has to do with twilight is all there is to go on at this point. Sometimes we are simply empty of ideas.  Nothing of worth seems to loom on the horizon in the way of inspiration.  There is nothing to go on except some vague feeling, and an impulse to create.  This fear of abandonment by the creative muse has given me much angst but, over the years,  I’ve developed strategies for dealing with this problem.  One way is to begin with a color, to paint a canvas with a ground of a single hue and visualize it as I drift off to sleep, asking that an image come to me in dreams.  As for the question of to whom I am making this appeal I can only say that it is addressed to Great Spirit, Hypnos, the Household Gods or maybe even my own inner wisdom.   The problem of from where dream imagery originates has never been satisfactorily answered.  I used this method in the painting Oriens.  I asked for a symbolic image for one of my Four Directions series-that of East.  When I woke next morning and, disappointed with a lack of response from the dream oracle, I opened the hatch on my boat and saw, rising from the low-lying fog, a vision of a celestial city bathed in the glorious morning light.  It was Seattle, a city very much situated in the waking world.  What this says about the efficacy of my method I don’t know, except that it inspired me to look at the external world in a fresh way. 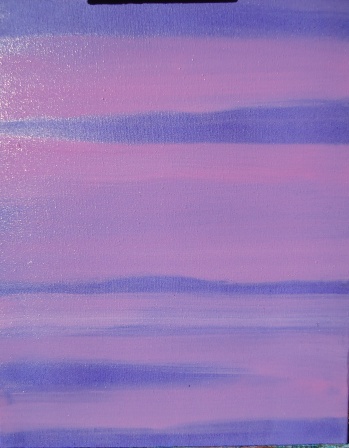 Here is a canvas covered with atmospheric veils of blue/violet and red/violet that suggests a seascape on an inland sea.  In fact, it looks like Port Madison.  I evoke the ineffable feeling of the moment between two lights-that of day and nocturnal luminance that lights the inner workings of soul.  When one is illuminated the other falls into shadow.

In my research of Port Madison history, it seemed those who inhabited these shores appeared to me in the violet hour, spectral forms who emerge from the shadows to demand remembrance, nourishment from the life they’ve long left behind. 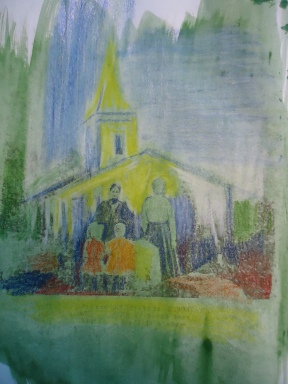 These phantoms seem to advance and recede as I work the material.

This image was a rubbing/transfer from a photocopy into my sketchbook.  Only after I photographed and enlarged it again was I able to discern the presence of figures who eluded me before.  They emerge with the process of working the image with different media.  It’s as if the artistic process is a form of conjuration.  In contemplation of these sombre hues I call forth the restless shades who reside beyond the dusky veil to take their places in the visible world.