The flood lifted strange flotsam high on the foreshore.  It  inundated  manicured lawns and rose above  bulkheads like a subversive force to undermine the Savings and Loan. A flood of ileagal aliens piled sandbags around lofty mansions.   The tide lifted ships upon meadows where mountain goats serenely ruminated on the folly of man’s defiance of  time’s natural ebb and flow.

“The King Tides are upon us old son,”  said Saturnius McWhirr.
A north-west wind blew over the hills above the Canadian town of Ganges and funneled through the long Harbor entrance.
“I was wondering why we paid out all that chain,”   I said as I wearily stowed the last links into the anchor box and McWhirr steered south east toward Swanson Channel.

Back in the wheelhouse all was relatively calm.  Compass in hand, McWhirr brooded over the  chart as  if searching for sea marks amid the labyrinthine inlets of the soul.  He  hails from solid Quaker stock and little given to effusiveness.
“These flood waters are a sign,” he says.
“Indeed, sir?”  I said as I struggled with the wheel in the freshening wind.
“Aye, if seen in their true light, the minutiae of everyday life correspond to spiritual truths  which can be traced back to their origin in the higher spheres.  This is the ultimate meaning of scripture.  It is by these way points that ancient spiritual traditions have long oriented their secret cartography, and piloted man across time’s turbid seas.” 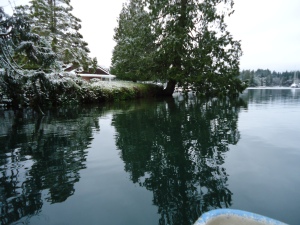 I was taken aback by these hermetic pronouncements from the normally reticent   Whirr.  The jib started to flog and I headed up toward Moresby’s Island’s north shore with the steep seas off the starboard quarter.
“Noah’s yarn has for too long been hijacked by literal fundamentalists,” says he.  “That esoteric shipwright, revered by Moslem, Christian and Jew for his devotion and navigational skills, sailed to  Ararat with remnants of the ancient, celestial teachings in stowage.  These teachings were anchored in the holding ground of love and charity.  Noah set those flukes high above the errant ways of the ruling Nephilim who, immersed in selfish desires, drowned in the waters of materialism and greed.  The waters that carried Noah safe to Ararat also dealt doom to the Nephilim.  The esoteric reading of scripture accords with the exoteric;  the environmental catastrophe now at hand.   Look ye: These are the very same waters that engulfed ancient cities!”

McWhirr dramatically swept his arms over the white-capped seas of the Channel.
I felt this was laying it on a bit thick.   After all, I hadn’t signed articles to get religion.  I held my tongue and braced against the wheelhouse as we rolled in the waves.

Astern, the northerly wind freshened to force 6 and  the sky looked like a wet dish-rag.  Even double-reefed  we were  over-canvased.
“Steady lad, surely your not afraid of a capfull of wind.  Come the day of reckoning, this gale will seem but a mild puff. Hand the main.”
McWhirr took the helm while I secured the lifeline and made my way forward to the  mast and lower the straining sail.
Old Hand settled down, but still made a good 6 knots under jib and stay sail, running steady across Boundary Pass.
McWhirr’s voice rose above the seas roar:
“It’s only by trial of such a stormy passage that man becomes spiritual,  liberated and ready to hear the call:  Go forth from the Ark!”  Eyes ablaze, McWhirr warmed to his theme with a passion I never knew possessed him.
The wind redoubled as Old Hand opened Haro Strait.
A large black hulk rolled in the waves ahead.
“Dead-head off the port bow!”
McWhirr turned the helm hard alee as we sailed past the log that had been set adrift by the King Tides; a cautionary sign to mariners and lubbers alike. 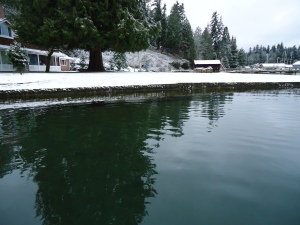